While the June core update took a while to start rolling out, the July core update hit hard and fast.

We asked several data companies that track Google’s search results to send us impressions of this update. The results from this data showed the while all agree this update was felt very quickly, most the data providers felt the June update was bigger than the July core update..

The facts. Google began rolling out the July 2021 core update at around noon on July 1, 2021. This update has not finished yet and is still rolling out as far as we know. The June 2021 core update, as we previously reported, started to roll out around 6:30pm ET on Wednesday, June 2nd. Like all core updates, this was a global update and was not specific to any region, language or category of web sites. It is a classic “broad core update” that Google releases every several months or so. The previous core update before the back-to-back June and July core update combo, was just shy of a six-month wait period, where the December 2020 core update took place on Dec. 3rd.

We expect the July 2021 core update to finish rolling out in less than a week, possibly by the end of this week.

Semrush. The folks at Semrush sent us data comparing the July core update to the June core update. Like the June 2021 Core Update, Semrush said “the July 2021 Core Update was unique in that it did not display prolonged periods of intense rank fluctuations.” However, unlike the June update, “the July update did not seem to show a lag between Google’s announcement and the impact on rankings,” the company added.

The Semrush sensor tool showed a 9.4 spike the day after the update was announced:

Here is the Semrush volatility by category comparing the two updates:

Were there overlap between sites impacted by the June core update and the July core update? Semrush said “of the 200 domains that made up the most impacted sites (i.e.,100 winners and 100 losers) during the July update, only 15 of them overlapped with the most impacted domains during the June update. However, of those 15 domains, 10 of them saw ranking reversals (i.e., if the domain saw significant ranking losses in June they saw significant increases in July and vice versa).”

Here is a chart comparing the July core update to the December core update: 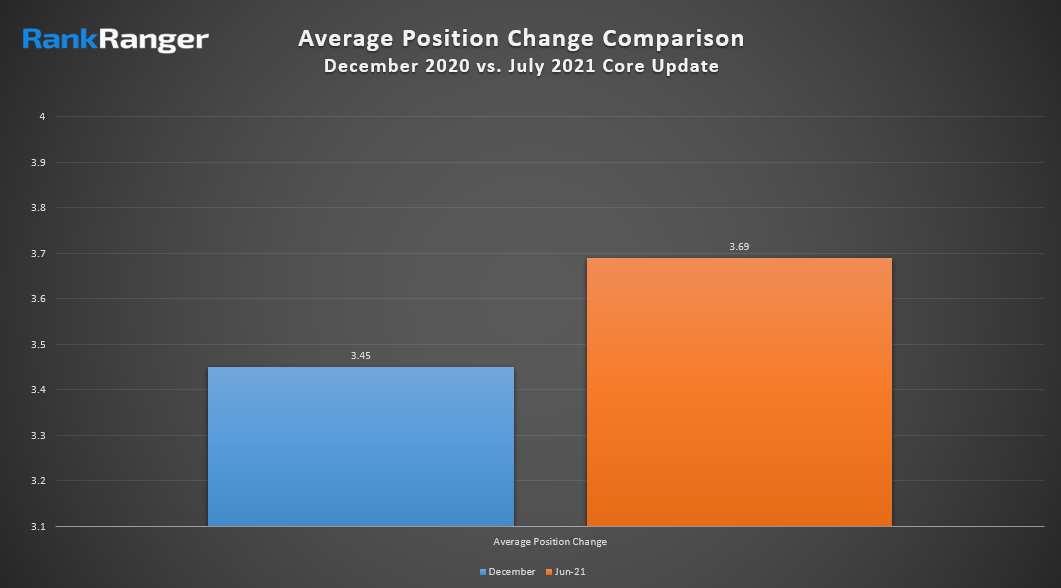 Compare that to the June report from RankRanger:

The reason that RankRanger saw this update as being more substantial than the December 2020 update was because of an increase in fluctuations in the top five results.  Check out this chart that shows the top five results having a much stronger shift than others: 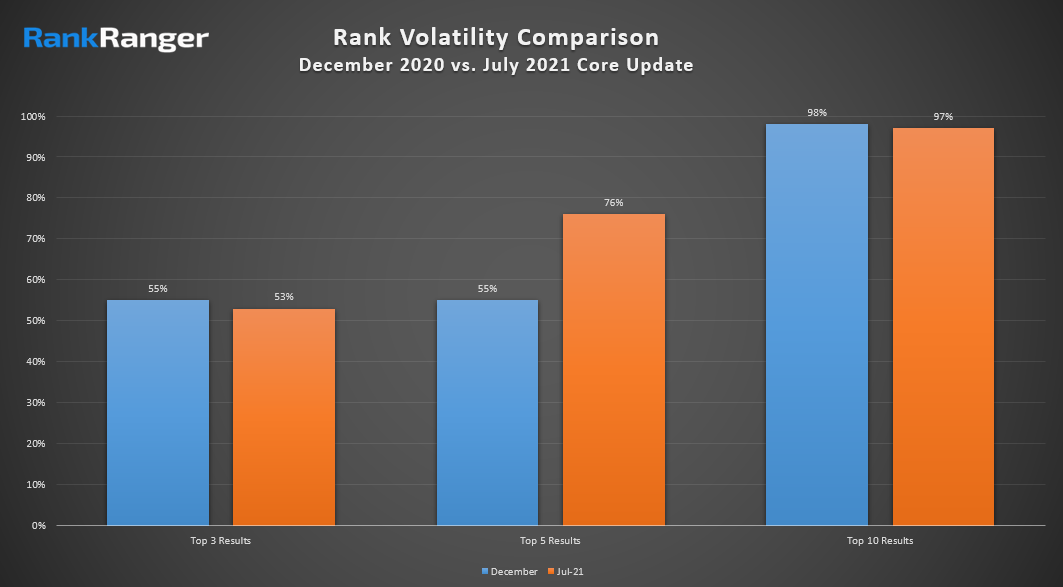 Compare that to the June 2021 core update data:

Here is a look at this by niche or vertical: 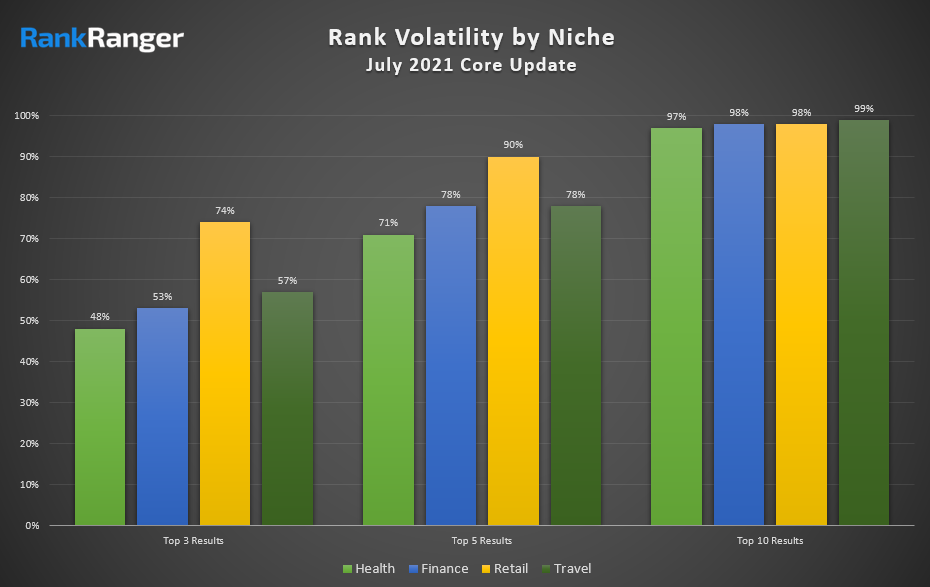 Here is the RankRanger index tracker chart showing how this update was hit big on a single day unlike the June core update that was spread over a few day period:

Sistrix. Steve Paine from Sistrix told us “as we’ve seen in the visibility data from other countries we have analyzed, many lists and reference sites have been hit.” For example, entertainment sites including lyrics and song information are apparent along with some travel sites too were impacted by this update. “Major SERP changes were detected starting on the July 3rd and the Core Update rollout appears to be complete now,” they said. This is unlike the Semrush and RankRanger data that detected this update on July 2nd.

Here are the top winners from Sistrix:

Here are the top losers from Sistrix:

The SEO community. The July 2021 core update was different from the June 2021 core update in that the community chatter and feedback on the update happened literally within 12-24 hours. Like we said above, it hit fast and in a big way. I was able to cover the community reaction in one blog post on the Search Engine Roundtable.

It is also good to review Glenn Gabe’s Twitter stream of individual sites he tracked being impacted by this update and his commentary around it, make sure to click through and scroll through the thread, here is just a snippet of it:

What to do if you are hit. Google has given advice on what to consider if you are negatively impacted by a core update in the past. There aren’t specific actions to take to recover, and in fact, a negative rankings impact may not signal anything is wrong with your pages. However, Google has offered a list of questions to consider if your site is hit by a core update. Google did say you can see a bit of a recovery between core updates but the biggest change you would see would be after another core update.

Why we care. It is often hard to isolate what you need to do to reverse any algorithmic hit your site may have seen. When it comes to Google core updates, it is even harder to do so. If this data and previous experience and advice has shown us is that these core updates are broad, wide and cover a lot of overall quality issues. The data above has reinforced this to be true. So if your site was hit by a core update, it is often recommended to step back from it all, take a wider view of your overall web site and see what you can do to improve the site overall.

We hope you, your company and your clients did well with this update.